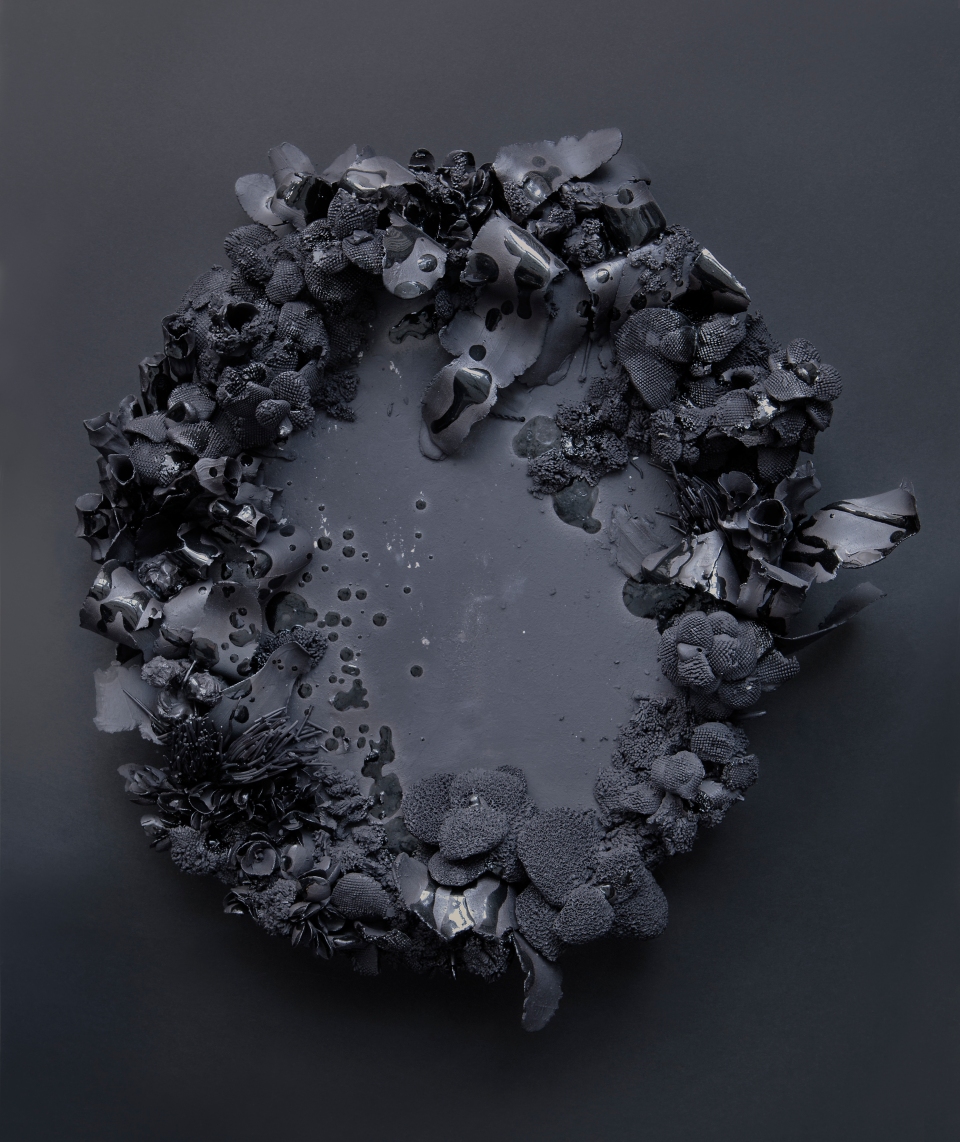 Veera Kulju is best-known for her popcorn-themed ceramic sculptures. Alongside individual works, the popcorn theme is a concept consisting of many elements distinguished by small variations. The series of artworks contains conceptual playfulness based on dichotomies. The solemn and the banal, fragile and strong, light and heavy meet in the popcorn sculptures.

In popular culture, popcorn is a snack strongly associated with movies, children’s parties and nibbling while watching TV. It serves as a metaphor for detachment, being on the outside. Popcorn is eaten when events are watched from the sidelines.

Porous popcorn sinks into the ceramic mass, it burns away during firing, but its form remains. This is like magic. The end result is a mystery, a wonderful play of materials, which one views with unbelief. The popcorn in Kulju’s artworks is the form of popcorn, which in reality is valuable as a material. An especially fine juxtaposition is created when the popcorn sculptures are made from hard, luminously white bone china.

Kulju works with textiles, ceramics and video. Her starting points in selecting the medium are contextual, often combining different materials in the same work. Video is an element of installation, and small cast ceramic sculptures are woven into textile. She says she has worked on the weavability of ceramic pieces. This way, she has used the sound provided by ceramics as part of a textile artwork.

Sounds associated with the forest come close to playing the main role in a video installation, in which a dancer puts on a sculpture-like textile artwork. With the movement, the work comes to life both as a visual object and a shamanic costume akin to a musical instrument, reacting to bodily movements. It may also be construed as a gigantic piece of jewellery, a body accessory requiring a wearer in order to become complete. The dance work provides a kind of key to Kulju’s entire production. It is based, like dance often is, on the balancing of strength and fragility.

Kulju’s different visual worlds are thematically connected. She has founded her artworks on the theory of gestalt therapy, boldly making use of its premises. This has led her to consider the concept of the eternal forest. She created small, jewellery-like pieces from clay, weaving and combining them to assemble installations characterised by abundant fragility and an atmosphere of permanence and timelessness.

In this same world belong Kulju’s mirror-themed reliefs. The fairytale wall-hung artworks could have come straight from the dressing room of Snow White’s stepmother. In reality, they don’t reflect, but rather absorb the light. They are constructed from similar small hand-crafted pieces as the forest installation, but now the pieces are solidly combined, forming a complete sculpture.

Although Kulju’s works encompass conceptual layers created through the materials, the aim is for viewing them to be physically experiential. Through the materiality and artistic idiom of her works, Kulju succeeds in conveying how they feel. Just by looking at the artworks, the viewer feels the differences between matte and glossy, rough and smooth, warm and cold in his fingertips.